The Sunshine Coast GIG was formed in 2005 to investigate groundwater in the region and through the collaborative efforts of individual landholders, local Community Groups (including LBCCG in recent times), Regional NRM Bodies (BMRG and SEQ Catchments), and NR&W, groundwater monitoring networks have been set up in the Maleny (upper Obi Obi and Walkers Creek catchments) and Eudlo catchment to the east.

Funding to support the project has been provided by SEQ Catchments and BMRG, with SEQC employing a Groundwater Projects Officer to coordinate the programme in collaboration with the GIG.

There is now a record of depth to watertable and daily rainfall dating back to January 2006 for a selection of bores throughout the Maleny Plateau area. Assessment of this data is on-going, with reporting of results due for presentation in June 2008. 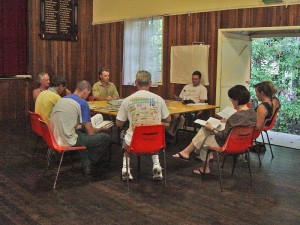 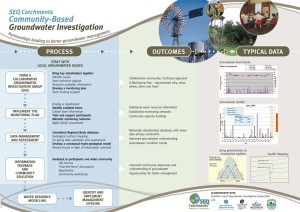 Focus turned to monitoring groundwater quality late in 2006, while water level and rainfall monitoring has continued. A partnership agreement between BMRG, SEQC, AquaGen and LBCCG, led to the start of the comprehensive groundwater quality monitoring program in January 2007.  The project was funded by BMRG, with considerable in-kind support provided by SEQ Catchments (project coordinator) and AquaGen (project management and E. coli analysis). Laboratory analysis has been carried out by the University of the Sunshine Coast under contract.

The programme of groundwater sampling, and analysis of nutrients, E. coli and groundwater chemistry, was completed in February 2008. The objectives of the project were to:

The water quality monitoring has involved:

Analysis and interpretation of the water quality information is currently being assessed in relation to local landuse and the geohydrology of the area, for reporting later in June 2008.

Any inquiries about the community-based groundwater project should be directed to: